Marty Rathbun: A History of Hidden Violence
“The criminal accuses others of things which he himself is doing.”—L. Ron Hubbard 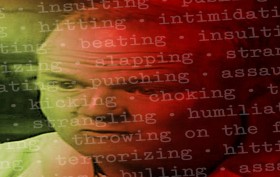 Cooper: For the record: did you ever punch somebody?

Did you ever lie?

Did you ever steal?

Did you ever nearly beat a man to death?

That Marty Rathbun can unequivocally answer “Yes” to all of these questions is only half his story. The other half concerns the fact Anderson Cooper knew full well who and what Rathbun was and he chose to both ignore it and keep silent.

All began one year earlier when Rathbun unloaded to the S.P. Times, pointing a stubby finger and leveling a “Do you still beat your wife” accusation. Although he thought it would go unchallenged, he was wrong and every person named as a target in a so-called tale of “abuse in high places” not only stepped forward to tell the true story, they also swore under oath that none of what Rathbun alleged ever even happened. More chillingly, they identified the true perpetrator of violence…it was Rathbun himself.

There was more. When the S.P. Times reporters were themselves asked if Rathbun had ever mentioned his “rap sheet” of violence, they got that “journalist caught in the headlights” look on their faces, because he hadn’t said a word about the 46 separate incidents he had perpetrated.

Whereupon Rathbun’s tall tale turned into a tell all wherein he had no choice but to confess he was the one with the abusive and violent past. But that didn’t mean his story lost its allure and it’s traction. Because with his co-conspirators Mike Rinder and Tom DeVocht corroborating and embroidering (they had first hooked up to suborn perjury in a police investigation in Florida and had proven themselves expert at telling the same lie), Rathbun took on a new persona as “bad guy come clean.”

And so it was that when Anderson Cooper sat himself in a CNN taping studio but two feet away from Rathbun, it was a veritable case in point of a pandering, agenda-driven ploy to try to snatch a TV ratings uptick from their rapidly diminishing audience. Because once again, and with all good blessings from CNN, Marty Rathbun was lying through his teeth.

To reiterate a few salient facts:
Between Rathbun, Rinder, and Tom DeVocht something terrible had happened—something violent and twisted.

The so-called investigation that CNN had kept on the shelf for as long as nine months utterly ignored the Church's side of the story and, for CNN, it was for good reason. If Cooper had introduced any of the documented evidence that had long been supplied by Scientology executives to set the record straight, Rathbun's credibility would have been extinguished forever.

And Cooper—well aware of this and choosing to ignore it all—knew that the man sitting just across from him was a deranged, physically abusive lunatic who engaged in the very reprehensible behavior of which he sought to now blame others.

That is, when Rathbun originally appeared on Cooper’s doorstep, he was peddling a tale of how Mike Rinder had been abused. In fact, however, the only abuse Rinder ever suffered was at the hands of Rathbun himself—and/or Tom DeVocht.

The point: Between Rathbun, Rinder, and Tom DeVocht something terrible had happened—something violent and twisted—and all three of them repackaged it as a so-called “tale of abuse” for Anderson Cooper’s consumption.

If Rathbun is left unchecked in his violence, it’s all headed to a tragic conclusion.

And even more than that, Cooper both knew it and willfully ignored that as well.

So here’s what else Cooper knew and chose to ignore:

Marty Rathbun had served in external legal affairs for several years when in 1993 he experienced his first meltdown. After a two-year sabbatical in which he was given every assistance to put his life together, he again made his way back into legal affairs. This time, after creating a new series of legal catastrophes, he was removed and stripped of all power and position. (See A Liar is a Coward; A Perjurer is a Criminal.)

When removed from the external battleground, this man who only knew how to fight, swiftly turned the internal playing field into his personal battleground—and worse, his colleagues were the enemies. What followed was a series of isolated and unseen acts of violence.

Indeed, Cooper and company were provided with no less than 24 declarations and affidavits detailing 46 acts of physical violence against 18 current and former Church staff. Moreover, every violent act was perpetrated and initiated by Rathbun. Despite all such documented evidence, however, Cooper never responded to the victims of Rathbun's rage. In fact, he didn’t even want to hear from them.

Thus, what follows here is still more of what Cooper willfully ignored. As an overriding modus operandi, Rathbun would typically isolate victims of his physical abuse behind closed doors. Consequently, none of those who gave their side of the story ever knew others suffered the same fate. In that respect, all that follows is independent and fact-driven. It is also drawn from sworn testimony under penalty of perjury. The victims’ names have been deleted, but the substance of the abuse is here in full:

“He abruptly reached over the desk and grabbed me by my shirt and pulled me out of my chair across the desk and dragged me down the table knocking over books, demo [demonstration] kits and everything on the tables. I was shocked beyond measure as I did not even know who he was."

>>INCIDENT 2
In a staff member’s office.

“Out of the blue, and with no expressed reason, walked up to me, grabbed me and pulled me out of my chair, shoved me into a wall and then walked out."

>>INCIDENT 3
Another office behind closed doors.

“He grabbed me by the shirt, shoved me against the wall and then kicked me in the backside."

>>INCIDENT 4
After Rathbun was stripped of authority, the attacks grew even more egregious.

“Rathbun’s punches were so hard that the blows knocked me back against a counter and my head smashed against a bookshelf and severely hurt me.”

>>INCIDENTS 5, 6 and 7
All of which occurred behind closed doors and far from witnesses.

“Rathbun came at me with both fists flying and punched me in the chest and ribs several times. I was hurting for several hours.”

“On at least one occasion during this series of incidents, the force of his attack caused my chair to topple over so that I landed on the floor.”

“I remember distinctly that during one of those assaults, he kicked violently at the side of my body and hurt me while I was on the ground.”

>>INCIDENT 8
Yet another both unprovoked and unseen.

“Marty reached out and shoved my body back against a solid wall directly behind where I was standing, resulting in making very painful contact with the solid wall, including the slinging back of my head and slammed into the solid surface, making my vision dizzy and losing my balance.”

“Without any warning, Rathbun suddenly punched me in the stomach with full force.”

“Rathbun walked into my office. He appeared upset with me, closed the door behind him and suddenly punched me in the stomach with full force, throwing me across the room, where I collapsed against my desk, and he walked out.”

“A few days later, Rathbun walked once again into my office, closed the door...and again suddenly threw me against the wall of my office using his full force.”

“Rathbun again walked in and without warning Rathbun pulled me by one of my ears and dragged me out of that office and all the way back to my own office…roughly a distance of 90 feet.”

>>INCIDENT 13
“Exemplifying the degree of anger he would develop is that one day he kicked a hole into the door leading to the area where my office was located. On another occasion he smashed the door open so hard, it drove into the closet behind it and the whole door handle smashed through the closet door. On yet another occasion, he threw a typist chair across the office and smashed it into the furniture.”

“The penetration through the wall was such that I feared the wall was going to come down on me while sitting at my desk. The ceiling tiles shook and the dust came flying down it was that hard.”

>>INCIDENT 14
This one actually witnessed by another.

“He had punched a staff member in the face and gave him a black eye. I later saw him walking around with a black eye.”

“As I was leaving an office and stepping onto the sidewalk, Rathbun walked up to me. I thought he was coming up to say something to me, and I paused in front of him. Without any preamble or warning, he punched me in the jaw with his fist. I fell back against the screen door of the building and stumbled sideways. I was not only in pain but in shock from the surprise of it. He then turned and walked away without saying a word. I thought he must have gone completely psychotic.”

All of which brings us to Rathbun’s meltdown:

>>WITNESS 1
“Rathbun’s bizarre behavior was often manifested in meetings where he would suddenly start breaking pencils and grinding his teeth. He did this at least forty times during the time period between 2001 and 2003.”

>>WITNESS 2
“Marty Rathbun was known to be a psychopath. He was irrational and violent. In 2003, prior to his final departure he told me that he was certain he was crazy.”

>>WITNESS 3
“Rathbun was now a wild animal that, unprovoked, was violent.”

>>THE VERDICT
The misery, humiliation and pain that so many had to suffer through—in a state of abject fear—finally came to an end when “wild animal” Rathbun was brought to account for his actions, and transferred to a lower-level Church and position.

In light of all the above, the only “challenge” Cooper put to Rathbun:

“In sworn affidavits, a number of Church members make specific allegations against Marty Rathbun, including more than a dozen instances of physical violence.”

To which Rathbun replied to Cooper:

“I did some [physical abuse] and I didn't come in here ever telling you I was Little Lord Fauntleroy and never did anything wrong. I’m no angel.”

No kidding. He’s a holy terror and a ticking time bomb ready to blow at the slightest provocation.

But in fact, however, there had been a time when Rathbun claimed he was indeed a Little Lord Fauntleroy who would nary harm a soul. Because that’s precisely how Rathbun positioned himself when he began his media-for-hire tour at the S.P. Times. The transformation to not being Little Lord Fauntleroy only occurred when he was exposed by others for the thug he is.

But the story doesn’t end there and, if Rathbun is left unchecked in his violence, it’s all headed to a tragic conclusion. Because if the rap sheet above is enough to electrify anybody but a San Quentin inmate, it was all before he was stopped from nearly killing a man with his bare fists. That man was Mike Rinder who, today, Rathbun claims is his “best good buddy.” In fact, notwithstanding the fact that Rinder would be dead at the hands of Rathbun if others hadn’t intervened, Rinder now serves as full-time “corroborator” and “fact-checker” for Rathbun’s revisionist history of his life and career.

And if it all sounds creepy enough so far, all the more so when you know the rest. (See The “Kinky” Relationship: Rathbun & Rinder.)