A LIAR IS A COWARD; A PERJURER IS A CRIMINAL:
The Rathbun >> Rinder >> DeVocht Conspiracy
and how it led to their downfall 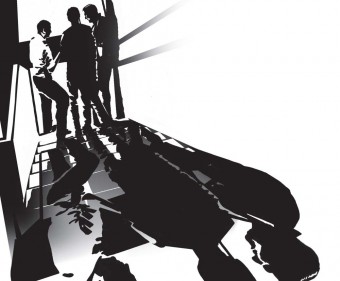 “Individuals with criminal minds tend to band together since the presence of other criminals about them tends to prove their own distorted ideas of man in general.”

As is well known, liars are cowards and cowards are liars. In fact, it’s a specific part of the Scientology Scripture as contained in its ethics and justice codes.

So it is that while lying is despised in society as a whole, it’s actually considered criminal within the religion of Scientology.

However, there is a type of lie that is considered criminal by everybody, because it represents conduct that tears at the very fabric of justice and civilized society.

By definition, a lie is “a false statement made with deliberate intent to deceive.” When one lies, it has consequences. When one is known to be a liar, one soon finds himself shunned by friends and associates.

But perjury is much more serious. It means “the willful giving of false testimony under oath.” It’s a criminal offense. And when one is caught committing perjury, one goes to jail. In fact the penalty is intentionally harsh so as to serve as a deterrent for those who may not possess the moral integrity to be honest or truthful. Those convicted of perjury serve up to five years in prison doing hard time.

But actually, there is an even worse type of criminal liar. That’s the person who not only tells untruths to law enforcement and the courts, but also gets others to do so as well. It’s called suborning perjury and it means “to induce a witness to give false testimony.”

People who are suborners of perjury are much rarer than the cowardly liar or criminal perjurer. That’s because it takes a great deal of persuasion to get another to lie to authorities. One typically hears of this sort of crime—suborning perjury—perpetrated by thugs, since it’s always an attempt to get others to lie to protect the real criminal. That’s why it also carries a sentence of five years in jail.

Here is the person who not only intimidates others to lie, but who looks at evidence of the truth and, as if out of an old gangster movie, tells his posse to “lose ‘em”—that is,  get rid of it.
All of which begs the question: Is there any greater form of dishonesty? Actually, there is. It’s called obstruction of justice, which means “an attempt to interfere with the administration of the courts, the judicial system or law enforcement officers, including threatening witnesses, hiding or destroying evidence.”

Here is the person who not only intimidates others to lie, but who looks at evidence of the truth and, as if out of an old gangster movie, tells his posse to “lose ‘em”—that is, get rid of it. Of course, this too is a crime, yet another five years in jail, but by now what does it matter to the criminal who has long since passed the point of any self-respect and considers laws are written for “suckers.” Meaning, honest people.

More to the point here: A person who would commit perjury, who would suborn perjury and who would obstruct justice is a person with the ethics of a gutter rat—a person who could tell a lie with a straight face to his “friends” and feel no remorse “unless I was caught,” a person who could see others being falsely accused of what he had done and keep silent while “lots of people go down and remain in turmoil while I go unrecognized as the source of it and survive.”

If you’ve never seen this face of evil and have
no desire to do so in the future, then be forewarned to avoid the self-proclaimed “Posse”: Marty “Kingpin” Rathbun, Mike “Corroborator” Rinder, and Tom “Con Man” DeVocht.

And if you’ve never seen this face of evil and have no desire to do so in the future, then be forewarned to avoid the self-proclaimed “Posse”: Marty “Kingpin” Rathbun, Mike “Corroborator” Rinder, and Tom “Con Man” DeVocht. Because all you’ve just read is their case history, the statements in quotes are their exact words.

And here’s what they did:

(Not for another decade, when he had his second mental breakdown, would he admit that the first breakdown wasn’t owing to the “stresses of war” but, rather, because the war was over when he actually had no desire for peace. As he himself phrased it, he only knew how to fight and was a “fish out of water” when it came to any constructive activity. But, as noted, that Rathbun confession wouldn’t come for another 10 years—in 2003.)

All of this is made possible for the fact that once one tells a lie, nothing one says is believed.

And so ensued 129 articles and 15 editorials, totaling some 30 newspaper pages and more than 4,000 column inches, urging criminal charges against the Church. The Times’ allegations are bizarre in the extreme.

All articles are authored by reporter Tom Tobin and his editor Joe Childs.

In addition to the Church itself, an attempt is made to make Rathbun, Rinder and Mr. Miscavige defendants. Mr. Miscavige is in Los Angeles attending to preparations for the Church’s Millennium (2000) New Year’s celebration. Rathbun and Rinder are the legal affairs staff responsible for handling the hearing. They attend to court arguments, whereupon they are dismissed from the case, but Mr. Miscavige is not, becoming a defendant.

He points to a previous court ruling in another case Rinder had defended, ruling that Mr. Miscavige had destroyed evidence. While that decision had been overturned, the same charge of destruction of that very evidence was once again being made. Moreover, this anti-Scientologist claimed that he witnessed the destruction of evidence by the ecclesiastical leader.

The anti-Scientologist argument was simple. Since Mr. Miscavige had destroyed evidence in another case, he would have been the one to destroy it in this case.

The hearing drags on for months. Mr. Miscavige repeatedly tells Rinder and Rathbun that he knows nothing of the missing evidence and certainly never ordered it destroyed (even if somebody else did).

Rinder and Rathbun are smug and do nothing about it. Their excuse is that the evidence is gone, no matter who did it, and how could they possibly have a way of responding to the charges?

Mr. Miscavige becomes convinced that Rinder and Rathbun must have destroyed the evidence. He orders an investigation by others to get to the bottom of it.

Rathbun was upset because the final remaining case was over and there were no more battles to fight. As he stated, “I only know how to fight. It’s all I’ve ever done.”

As it turns out, Rinder and Rathbun had not destroyed the evidence Mr. Miscavige had long been accused of destroying. In fact, all allegedly destroyed evidence—seven feet of it—was found, within one hour of the request, in pristine condition, in Rinder’s storage in Los Angeles.

Rinder was in possession of the evidence the whole time and had sat on it to the point of court rulings holding Mr. Miscavige responsible for ordering the evidence destroyed when, in fact, said evidence was sitting right in Rinder’s office. Rinder’s only excuse: He “didn’t know” the evidence was there. However, it was also clear: He never even looked.

Upon his return, Mr. Miscavige takes immediate disciplinary action, dismissing Rathbun entirely and posting him in a lower-level Church.

He would finally admit that in both 1993 (his first blow) and now, he was upset because the final remaining case was over and there were no more battles to fight. As he stated, “I only know how to fight. It’s all I’ve ever done.” 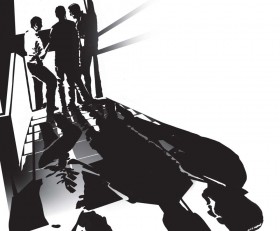 Rathbun claims he’s a “warrior” and that he’ll be back when the next war starts. He’s informed there won’t be any further wars.

He swears he’ll prove his competence by helping people, whereupon he’s next heard, literally, asking where his 9mm gun is. He is written off as the psychotic he is.

Why would Rinder shake DeVocht’s hand? Rinder provided no answer. But it remained a mystery nobody forgot, repeatedly probing to get to the bottom of it.

He finally admits that both he and Rathbun knew the entire time what happened to the evidence discovered in Los Angeles. In fact, he and Rathbun were the ones who put it there—and said nothing about it while Mr. Miscavige was being accused of having destroyed it.

Rinder makes another stunning admission: that it was Rathbun himself who had violated Church policy and ordered the psychotic onto Church premises, overriding all other staff who had refused to do so, since it was an obvious violation of the Church Founder’s policy.

Finally Rinder admits that he had conspired with Rathbun to point the finger at others who, once dismissed for their supposed misconduct, would no longer be around to expose Rathbun as the culprit. Rinder and Rathbun had let dozens go down or be dismissed—ordering their dismissal—to cover up that they, Rinder and Rathbun, were the actual perpetrators.

(As for the real reason they covered up who had allowed a psychotic on Church premises, it was because both Rinder and Rathbun knew they would be dismissed from the Church for violating the Founder’s policy on psychotics not being allowed on Church premises. And that was all in addition to a possible 10 years in jail for destroying evidence and suborning perjury, in forcing every witness to not be truthful. As for why Rathbun would allow a psychotic on Church premises, in contravention of the Founder’s specific policies, that would only be discovered years later. Specifically, it was Rathbun’s familial history of insanity—never revealed by him, although required on his application for Church staff—which prompted him to act irrationally in allowing a psychotic on Church premises in a misguided effort to attempt more than was done during his upbringing when his mother and both brothers were institutionalized.)

This was all Rinder admitted to in 2007—although, two years later, both he and Rathbun would finally confess to something even more startling.

For Rinder was a man who lived for the glory of walking in the shadow of power, and his fall in disgrace was more than he could tolerate.

Nevertheless, Rinder’s fate was sealed and he knew it. He would never again hold an executive position in any capacity and should he not complete an ecclesiastic ethics program, he would be transferred to a local Church parish to service parishioners and regain a sense of the Church’s religious mission.

For here was a man who lived for the glory of walking in the shadow of power, and his fall in disgrace was more than he could tolerate. Over the preceding five years, he’d been given dozens of opportunities to reform and always thought he’d be given another. Finally realizing he’d have to earn his own way back up, he instead left his colleagues, his wife of 35 years, his children.